Concept : Initially i decided on starting out the animation in black and white, then to add color to some words to highlight and add some interest. Meaning i wanted to highlight instances (ie: words and concepts in the design) in red.

Moodboard : I wanted to keep it simple as this was my first After Effects project. So i focused mainly on the colours i wanted to use. 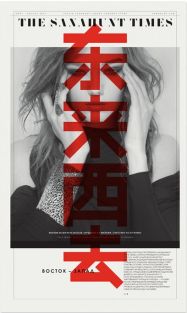 Animation : Starting out i structured the animation text needed for the project creating the main structure of the text in the animation. While story boarding a wanted to create something connecting the text to the studies Noroff provide, however doing this for every instance would be too much for a 30 second clip. I decided on a few aesthetics that i felt described the kind of work and concepts the students of Noroff work with.

The most time consuming part of this animation for me was going over all the videos about how to use After Effects. Learning the software itself by using it was the most rewarding for me personally and i am happy with the end result concidering this was my first shot at doing a professional intro in motion design.
Sound : I considered creating the sound design myself, however i wanted to keep my focus on animating rather than creating music for this assignment as i have never animated anything before. Keeping focus on learning as much as i could about using Adobe After Effects and animation.

After i got the animation going and things started to fall into place i spent allot of time doing small tweaks and making everything work with the music/beat. I also wanted everything to be timed well and did my best to try and keep the text flowing and somewhat dynamic. I tweaked and focused on the details as well even though they may not be
noticed the first time someone sees the intro.

I commissioned a musician to create something for me and this assignment. However life happens and the track was not finished when i needed it for my animation. I had a feeling this would happen this time around so i had already
researched and decided on a backup track to use.
Artist : Ceno Limit.

The licensing of this track is free as long as i credit the artist and do not use it for commercial gain (re-selling or charge for its use in any way).
I have reached out to the artist asking about the track and to specify this, however i never received any reply.

1. Usage. YOU ABSOLUTELY CANNOT USE THE INSTRUMENTAL COMPOSITION OF WHICH YOU ARE ATTEMPTING TO DOWNLOAD (hereinafter referred to as “the Beat”) FOR ANY FOR-PROFIT, COMMERCIAL, OR FINANCIALLY EXPLOITATIVE USE. AN APPROPRIATE LICENSE MUST BE PURCHASED OR PROPERLY OBTAINED IN ORDER TO EXPLOIT THE BEAT. Acceptable use without obtaining a license (hereinafter referred to as “Free Use”) includes:

2. Credit. You will provide proper credit for the creation of the Beat by writing ‘Produced by (Insert Producer Name) on all official documents or surfaces released with tangible copies of a recording on the Beat. It is alternatively acceptable to credit the Beat’s direct producer’s real name or stage name for the creation of the Beat. If there are absolutely no means to provide written credit, vocal credit is required by actually recording the phrase ‘Produced by (Insert Producer Name)’ within the first 30 seconds of the Beat.

Design :
The design outcome is what i desired for this project. I focused on the typeface provided and had fun using it in the animation in different ways. The Gotham Typeface have alot of different fonts i could use to create something dynamic.
The one exception in this is the “Graphic Design” headline that i animated as handwriting,
here i used Brush script typeface to create the desired effect.

Analysis :
All in all i am satisfied with my animation. A few notes i have made for myself during this project is that i learned allot about animating text and effects. Next time i animate in after effects i would like to pursue something more visually “artsy”, meaning i want to use more illustration and maybe even videography to enhance my motion design.